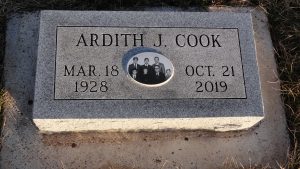 On April 7, 1946, Ardith was united in marriage to Bill Cook in Hiawatha, Kansas. They became the parents of five sons; Dale, Stan, Keith, Keven and Rob. Ardith was a stay at home mom, taking excellent care of her five sons, while the family moved because of Bill’s employment. They made their home in Kansas City, Missouri, Cameron, Missouri, Rockwell City, Iowa, Le Mars, Iowa, Riverside, South Dakota, Glendale Arizona, and Mesa, Arizona. In 2004, they returned to Rock Port, Bill passed away in 2006. Soon after his passing, Ardith moved to Norfolk, Nebraska to be closer to her sons. Ardith passed away Monday, October 21, 2019 at Heritage of Bel Air Nursing Home, Norfolk, NE at the age of 91.